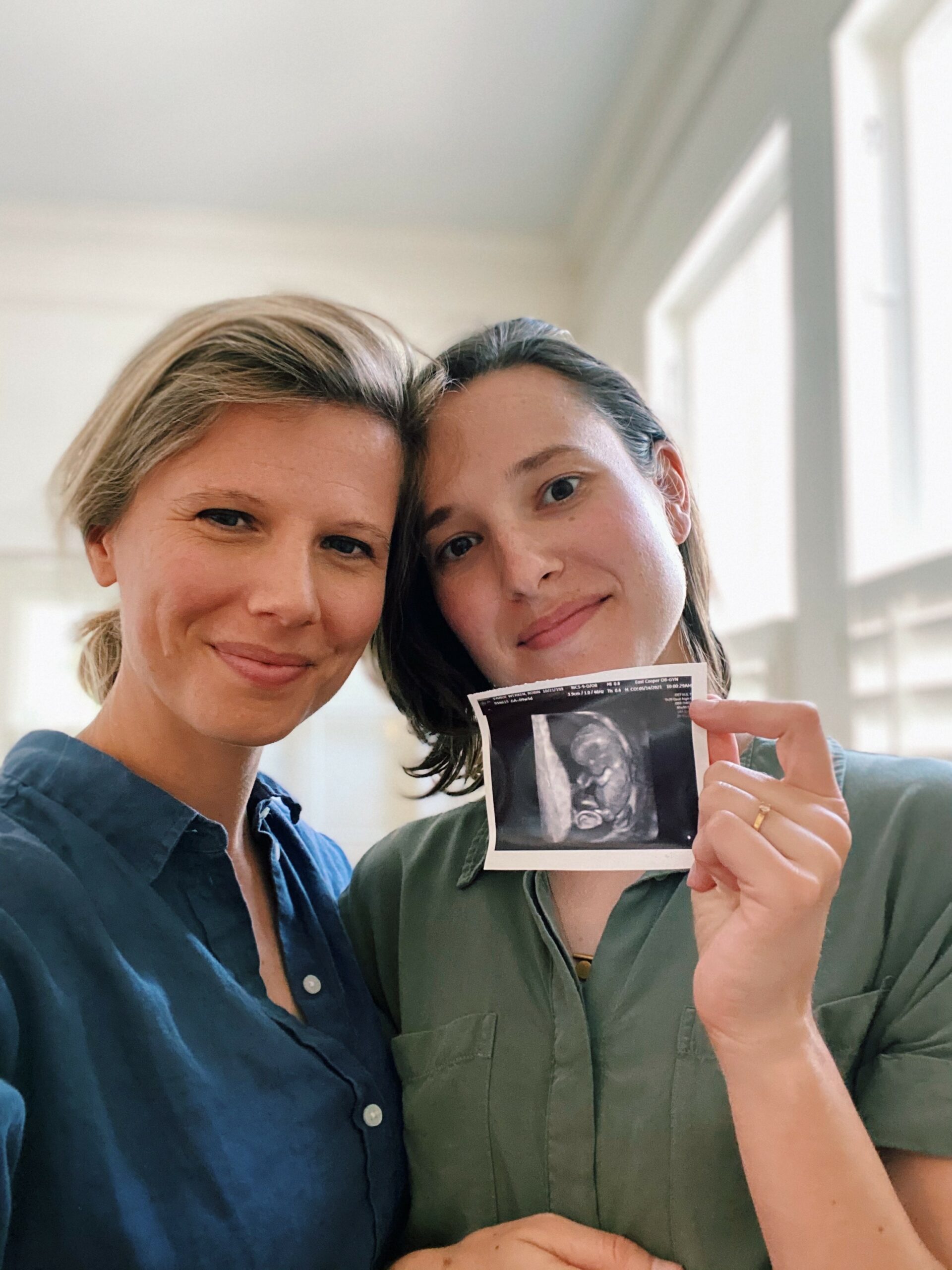 Written by Megan Martin, a freelance writer who lives in Los Angeles with her husband and daughter.

Though we knew this all along, speaking with diverse families for Pride month solidifies it even more: there is no one way to start a family. Modern medicine has paved a new path for people to conceive despite physical obstacles. Robin and Jess Vande Werken know this all too well.

After being diagnosed with triple negative breast cancer — an extremely rare and aggressive form — that led to a double mastectomy, Robin Vande Werken was simultaneously faced with the question of her life, and that of her future children. Before she underwent chemo, she and her wife Jess decided to harvest their eggs for a process called reciprocal IVF (more on that later).

Fortunately for all, Vande Werken has just celebrated her two-year anniversary of being cancer free this past week, and she’s also celebrating other big news: the couple is expecting their first child later this year.

“This type of cancer comes back in the first few years if it ever comes back,” Vande Werken told us over email. “So making it this far feels really, really good… At one of our early ultrasounds, the doctor pointed to the embryo and said ‘there it is, 11mm long’ and that hit me hard because just two years ago, I had 11mm of death inside me in the form of an aggressive tumor. It was surreal.”

We sat down with Robin and Jess over Zoom to hear more about their story— how, as a same-sex couple, they both get the unique opportunity to share DNA with their baby, how Robin grieved the inability to breastfeed due to her mastectomy, and how they ultimately found comfort when they discovered baby formula brand, Bobbie.

Robin: I was diagnosed at 27 with triple negative breast cancer which is a really rare type that affects between 10 and 20% of women who get breast cancer. It’s more commonly found in women of color, younger women, and women who carry the gene mutation, which I actually don’t have. I have no family history of breast cancer whatsoever so it was a really big surprise and really scary and it’s a really aggressive diagnosis.

When we first started [chemo], we had the option of freezing eggs and it wasn’t something I’d ever thought about before, but we did it. We had to make a weird, quick decision to do that before chemotherapy because of the risks of it interfering with your cycle. So we did it up in New York and that was our first fertility experience— we worked with the Weill Cornell Clinic.

We’ve got 17 little eggs that we’re paying Manhattan rent for and so those were ready for us when we wanted to take that step.

Getting pregnant through Reciprocal IVF

Reciprocal IVF is commonly referred to as partner IVF, partner-assisted reproduction or co-maternity IVF. It allows both partners to contribute equally in the IVF process. Commonly one partner is the egg donor and the other is the carrier.

Robin: We were both definitely on the same page that we wanted to have children and I felt really strongly about reciprocal IVF. It wasn’t really something that Jess had heard much about before. It’s such a beautiful way for both parents to be biologically involved That child will have Jess’ DNA, but by me growing that baby there’s also parts of my DNA that I will share with the baby, so we’re both very much the biological parents. I just thought that was the coolest thing ever. We’re now pregnant!

Jess: Since we’re two women, we have extra parts, I guess. We are able to harvest our eggs and then swap them once they’re fertilized. What Robin’s pregnant with right now is my egg fertilized with donor sperm. We went through that process earlier this year and it was crazy.

Two moms, one lawyer and a birth certificate

Robin: It’s so neat because a lot of people we tell about this, their first question is, ‘Isn’t there organ rejection stuff? Like, is that okay for you to carry the egg that’s not yours?’ Then it takes people a minute, like, oh wait, surrogacy. It’s totally fine and it’s a way for us to be super involved in growing this baby and the genetics of this baby which I think is so, so cool.

It’s a little frustrating, we have to have a lawyer involved. Being two women, the federal law states we can both be on the birth certificate, but each state has the ability to interpret that law. So the state decides if they will recognize us both as parents or if one parent is the true parent, which is insane. It doesn’t seem like that should still be something you have to factor in.

So while we’re doing all this medical stuff we had to hire a lawyer and have all these court documents signed before the clinic would even agree to go forward with it and it felt so bureaucratic and intensive and medical.

Getting pumped full of hormones

Jess: It did feel very clinical. We were both essentially pumped full of hormones for several weeks which is super trying when you’re both pumped full of hormones! A lot of crying, a lot of moods happening. Then we did the egg transfer, so when my eggs were ready to be taken out of my body at that exact moment, they prepped Robin to receive the embryo.

Robin: Which is a lot of hormone injections to build up the uterine lining as if you were having your own natural cycle.

Jess: A lot of needles, a lot of injections.

Robin: We learned a lot, which is also kind of crazy. Going through the process I realized that eighth grade biology does not prepare you because I was like wait, I still don’t understand ovulation. Tell me how this exactly works!

Pregnancy emotions after a health scare

Jess: She cries all the time right now.

Jess: You don’t have a baseline for doing this before. It feels incredible. There was definitely a time when we were both really nervous about Robin being able to carry a child at all.

Robin: Me being able to live at all.

Jess: This is a huge, huge, huge step forward for us.

Even a couple years ago [reciprocal IVF] was not common. Back when our parents  were having children that really wasn’t an option.

Robin: Even in New York, there were not a lot of people the hospital could connect me with who had the same breast cancer diagnosis because it was extremely rare. So I developed this really strong online community of other women who I’d met, mostly through Instagram, who had the same diagnosis and a lot of them were young.

We became this really strong hub and I made a lot of good friends. When we got pregnant and I was sort of thinking ‘man, what am I gonna do to feed my kid?’

I think I must’ve seen an ad for Bobbie or something, so I clicked on Bobbie’s Instagram, and the first thing I noticed was so-and-so and 17 other friends also follow this account and I was sort of like, okay, I don’t have to decide anymore! My hub of cancer survivors have spoken and this is what they want and so I’m in. That’s what kind of drew me to [Bobbie], knowing these women who had already faced the same challenges as me and had the same values as me had already made a decision based on research and experience.

Formula in the US compared to formula in Europe

Robin: Formula has been so blah in the US. It hasn’t been changed in so many years and regulations haven’t been updated in several years. I look at Europe and see so many regulations on farming, on pesticides, on chemicals used in everyday products and I see different regulations on baby formula and that makes me think they’re stricter over there for a reason, like the US hasn’t caught up. There are a lot of reasons for us to be skeptical of big pharma industries here. So seeing brands like Bobbie that are shifting towards European formula styles while meeting all the things that FDA tells us we need to have is really cool because you’re giving us options we didn’t have before.

I never thought about different types of formula because I always assumed that I would breastfeed and I was 100% on the breastfeeding train, because I’ve heard all this rhetoric about that’s the best thing for my baby. It’s been really awesome, throughout this grieving of not being able to breastfeed process, to read information about how good formula is but also to read things like Emily Oster’s book titled Cribsheet, where she talks about how there really isn’t a difference in cognitive results and behavioral results between babies who are breastfed versus babies who are formula fed. She’s able to look at all the data and actually show that this choice is okay and even if it’s not a choice, it’s still okay. It’s good. The baby will be fine and that’s been a really helpful opportunity to have as we prepare.

Embedded within the Bobbie DNA is the notion of inclusivity. Our formula allows parents and caregivers to confidently feed and bond with their babies — free of judgment and worry. During Pride month, the tenet of inclusivity feels all the more relevant. This was a great opportunity to share the stories of same-sex couples who have successfully started their biological families and have turned to Bobbie on their feeding journey. We share the story of Trans Dad, Trystan Reese, gay father, David Reed, same sex couple the Ongs and others we truly admire.

What is reciprocal IVF / Resolve

Megan Martin is a freelance writer who lives in Los Angeles with her husband and daughter.