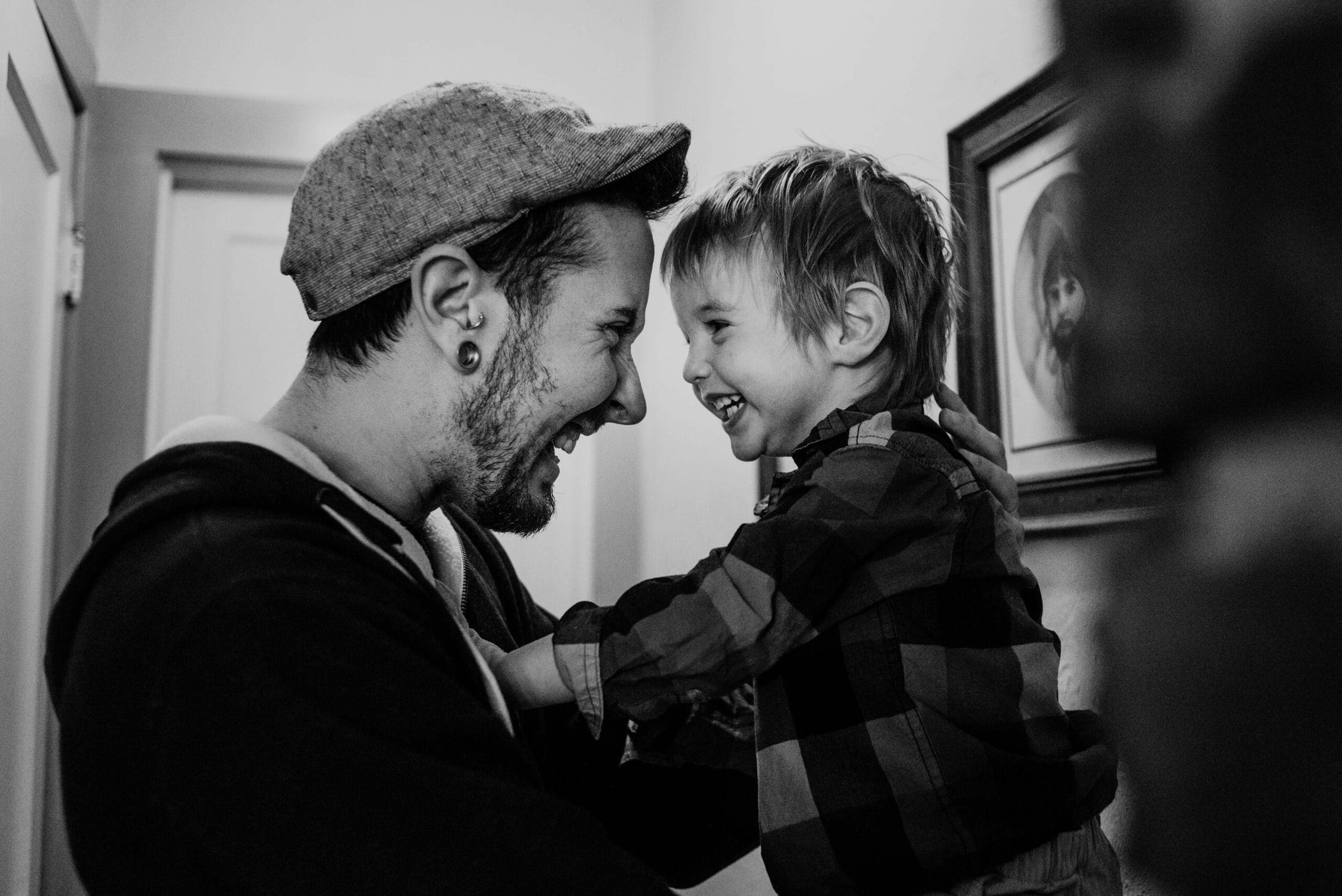 Written by Aliza Friedlander, Milk-Drunk Contributor and mom of two.

With more than 45,000 Instagram followers and news stories on CNN, Healthline and People Magazine, Trystan Reese is used to sharing his life with the public. Trystan skyrocketed to stardom when he became pregnant with his son and generously shared his experience as a transgender pregnant man. He’s documented it all in his new book, How We Do Family.

He talked to reporters about wanting to have a biological child, about what it was like going off his testosterone to conceive, about his feelings towards his trans body and how he’s comfortable being a man with a uterus. But when journalists asked about breastfeeding, which Trystan told me happened regularly, he would say:

“Thank you for your concern. I know you want to make sure our baby is well nourished and well fed in his early life and I assure you he will be well nourished and fed. But the way we are doing that is not something we are sharing.”

So why, after being an open book about almost everything else, did Trystan and Biff keep their feeding journey private?

Trystan shared, “My mother, who hates giving advice, asked me if it was OK for her to give me a few simple pieces of advice having been pregnant herself. She told us not to tell anyone what we were going to name the baby until we had it written on the birth certificate, not to tell anyone our birth plan and not to tell anyone how we were planning to feed our baby.”

“I didn’t want people thinking about my body in that way, or telling me that my baby would be sickly if I didn’t breastfeed, which I heard a lot. So we opted not to share any of our feeding journey until Leo was almost two and I felt it was a safe enough distance away to say how we fed.”

Now that Leo is almost four years old, Trystan is proudly, confidently and unapologetically discussing his feeding choices.  He tells us, “I would love to support anything around normalizing formula!” Trystan and I recently sat down, via zoom of course, to discuss his journey as a trans dad, where he openly and honestly answered all my questions, proclaiming “out of all the small and large decisions between pregnancy, labor and delivery, using formula was the single smartest decision we made.”

Why was using baby formula the “smartest decision” you made?

I knew my mental and physical health was critical in the postpartum period and using formula enabled me to get the support I needed to heal from rib separation, hemorrhaging from labor and months of growing a human inside me. Formula allowed me to take care of myself and rest postpartum and gave my partner the opportunity to feed. I was also concerned about hoarding the biological connection to the baby:I had nine incredible months of feeling so biologically and inextricably  linked and in sync with our little guy during the pregnancy, and I was worried about Biff not having that same connection to Leo. Using formula was a way to ensure that Biff didn’t just feel connected but was an equal partner with the same sacred experiences nourishing our newborn. We also read Emily Oster’s “Expecting Better: Why the Conventional Pregnancy Wisdom Is Wrong–and What You Really Need to Know” and learned with skin to skin and eye contact, you can trigger the same oxytocin experience generated when breastfeeding, which meant Biff could get those same feelings as if he were nursing. My mother-in-law also got to have the feeding experience, as did our daughter, who was six when Leo was born. One of the sweetest pictures we have is our daughter shirtless, doing skin to skin with Leo in a diaper feeding him the itty-bitty hospital bottle, the two gazing into each other’s eyes.

How did you come to the decision to formula feed?

I wanted to approach the feeding journey the same way I approached the whole labor and delivery, with no preconceived notions and feeling peaceful about what worked out for me, the baby, my body and my family. Towards the end of the pregnancy, Biff and I decided nursing wasn’t something we wanted to pursue and that we wanted to solely opt for baby formula.

Why not use a milk bank?

A lot of people in the transgender community use milk banks and if that is something that feels beautiful to you and makes you feel connected to the community, that’s great! But if not, that’s great, too. I had someone in my life ask if I had located a milk donor. The person didn’t ask if I needed help with locating someone, but rather assumed I wasn’t going to feed the baby with my own body and that I needed a donor, and that using formula wasn’t even on the table. That really hurt my feelings. I just wasn’t comfortable feeding Leo fluids from a stranger’s body, and knowing that formula is the most rigorously tested substance in the country made it the exact right choice for us.

How did healthcare providers react to caring for a transgender pregnant man?

The labor and delivery parts were fine. They call it labor for a reason—it’s hard work. But I got an epidural, and everything went as it was supposed to. But during every prenatal visit leading up to the delivery, the providers would ask if I needed a pump or nipple shield. I had to tell them every time that I wasn’t going to breastfeed. When you look at the data around trans pregnancy and postpartum, for a lot of us it isn’t possible to breastfeed because of gender affirming surgery or because our dysphoria is so strong that we know it’s going to be physiologically and psychologically dangerous. It was frustrating having to say the same thing over and over again— we are using formula.

What was feeding like when you were in the hospital?

The single least competent part of my entire process was the lactation consultant, who had no idea what to do with two men— one of whom had given birth and didn’t want to breastfeed. The lactation consultant knew nothing about formula. I asked questions like, did I need to supplement vitamin D with formula like people have to do with breast milk, could I give formula at room temperature or did I need to microwave it in the middle of the night? At one point Leo was drinking from the bottle and I heard a clicking sound. I asked the lactation consultant  if she thought he had a tongue tie and she looked at me and said, “you know what that is?” I had read dozens of books and was a part of 90+ Facebook groups on pregnancy. Yeah, I knew what a tongue tie was.

Did anyone say anything to you when they saw you bottle feeding?

Most people wrongly assumed I’d had top surgery and would not be able to feed Leo, or that I didn’t want to breastfeed, which was true. But in public, I didn’t deal with a lot of comments. You would be surprised how infrequently people feel like they have a right to say something about a man’s decisions. Being a man and feeding a baby in public…no one ever asked.

What about when you were pregnant? Were people vocal about it?

People didn’t assume I was pregnant for many months because they don’t look at men’s bodies the same way they do women’s. I was working alongside another pregnant person, a woman, and people shamed her for what she was eating. When she came out of the elevator, people told her she should use the stairs to get more exercise. People didn’t say stuff like that to me, which made it clear how present and rooted in sexism the mom shaming culture is and who feels they have power or control over a woman’s body. Once everyone knew I was pregnant, I then told my colleague what I had seen was happening. Then I would correct people. I asked why they would say something about her food choices but not mine and let them know that that was sexism. And when we talk about people wanting to touch the bump, I would tell people the baby was kicking and ask if they wanted to feel it. But people didn’t want to say or do the wrong thing, so they were overly cautious. I remember when my dad came to visit, the first thing he did was put his hands on my belly and it was so sweet. He was the only person who did that!

Any advice to share when it comes to feeding?

Don’t tell people how you are going to feed your baby. It’s about your body, your family structure and your relationship to your baby.  It’s none of their business and you don’t owe anyone anything. You can thank them for their concern and let them know you are keeping it private. You know what’s best for you and your body.

Breastfeeding is like any other relationship, if any part doesn’t work for either person, something needs to change. If formula hadn’t worked for Leo, we would have tried donor milk. And if that didn’t work, I would have tried to body feed. All that matters is the baby gets the nutrition that they need.

Embedded within the Bobbie DNA is the notion of inclusivity. Our formula allows parents and caregivers to confidently feed and bond with their babies — free of judgment and worry. During Pride month, the tenet of inclusivity feels all the more relevant. This was a great opportunity to share the stories of same-sex couples who have successfully started their biological families and have turned to Bobbie on their feeding journey. We share the story of same sex couples David and Chris Reed and the Ong family amongst others.