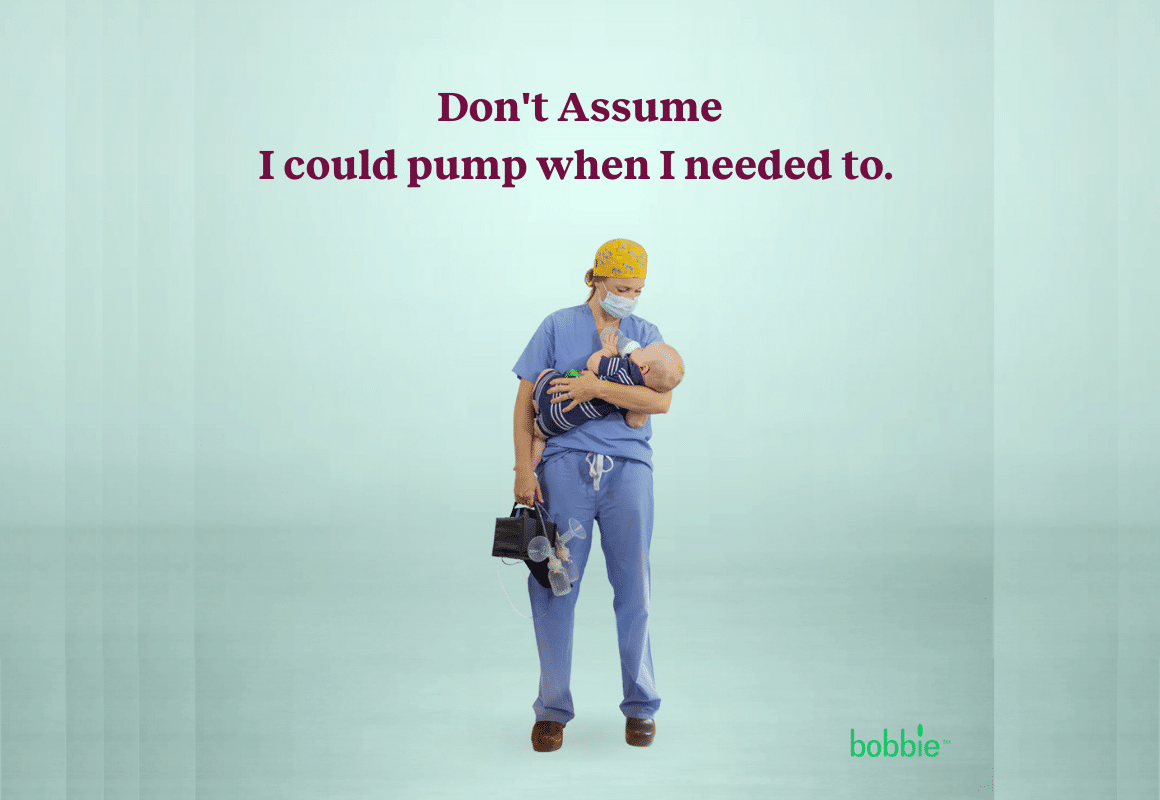 Rae, the mom of a two-and-a-half-year-old daughter Evelyn and five-month old son Caleb, is part of the minority. She’s one of the 25.6 percent of women who exclusively breastfed to the recommended Centers for Disease Control and Prevention’s six-month mark. That, despite returning to work just weeks after both of her kids were born. We’re sharing Rae’s story of how she made it to the 6 month mark exclusively breastfeeding her baby through surgeries and early hours thanks to a supportive work environment. She counts herself lucky as she knows not all of her colleagues in healthcare are in the same position.

Pumping in a supportive work environment

“I’ve been blessed to have a supportive work team and kids that are good breastfeeders,” says Rae. “Overall, I’ve had a really good feeding journey. I know some people hate breastfeeding, but I don’t. I almost have a sense of guilt that it’s been enjoyable and something I don’t have to angst over. I know so many people out there, including friends of mine, who had terrible postpartum depression and mentally couldn’t breastfeed and felt so guilty. I should feel lucky that feeding doesn’t cause me a lot of problems, but the mom guilt is real.”

Despite her positive experiences with breastfeeding, her journey hasn’t come without some struggles, including bouts of mastitis and clogged breast ducts as well as the constant need to pump after going back to her job as a physician’s assistant in orthopedic surgery.

Pumping takes a lot of time and effort

“When I went back to work, I was pumping every three hours,” says Rae, who works three 12-hour shifts. “I would leave in the morning and have to pump as soon as I got to my office. Pumping takes about 20 minutes and then I clean my pump parts and store my milk. It’s worth it to me, but if I had to work five days a week I don’t know if I would continue. It’s taxing enough on those three days.”

In addition to the time it takes to pump, there are times Rae’s found herself in surgery during let down.

“Operating cases can go anywhere from four to 10 hours and during that time I’m stuck in the OR,” Rae explains. “Luckily, I have a lovely team and if I need to pump one of my coworkers will usually scrub me out, I’ll run upstairs to my office to pump and then run back into surgery. But there are times when my coworkers aren’t available to help, in which case leaving isn’t an option and I’m stuck.”

It’s that support system that allows Rae to succeed in her desires to provide her babies with breast milk while having a career.

“I work with two other Physician Assistants and since we started working together, we’ve welcomed five kids between the three of us,” explains Rae. “We have all worked and pumped so I have that support and understanding. I was the last one out of the three of us to have a baby, so they really paved the way for me in terms of that. I’m unapologetic about having to pump—I put a nursing cover on in my office and just go for it.”

Switching from breastfeeding to combo feeding

After exclusively breastfeeding her daughter for the first few months, Rae eventually switched to combination feeding.

“I didn’t switch to combination feeding earlier partly because of financial reasons and the fact baby formula is expensive and partly because I was an overproducer and felt guilty for formula feeding when I didn’t have supply issues,” Rae explains. “I never felt pressure to breastfeed from my husband or other family members, but I felt it from myself. I felt if I had the ability to do this for my babies I wanted to for as I was in a good mental and emotional state.”

It was the combination of work demands and stress that ultimately led Rae to drop a mid-workday pump session.

“It was a really busy time and I was trying to work and pump at the same time,” Rae recalls. “I would get this mental block where I couldn’t pump because I wouldn’t have any let down. I would have to stop working or doing anything except look at pictures of Evelyn in order to produce milk.”

While Rae doesn’t consider her transition to combination feeding a challenging one, it was one filled with a lot of trial and error.

“Evelyn had terrible reflux and would spit up everywhere,” says Rae. “When we added combination feeding, we must have tried four or five formulas before we found one that worked. I didn’t have any guidance, partly because I didn’t ask my pediatrician. But I did go down the black hole of looking online. There wasn’t a ton of information, but I relied on mommy blogs to see what worked for others.”

So far,  Rae’s two feeding journeys have been similar, except for one aspect; the added anxieties as a result of the Coronavirus pandemic.

“The first time around, I wasn’t nervous about pumping in the hospital or worried about germs,” says Rae. “This time around, because of the pandemic, when I went back to work, I was worried about how I would clean my pump, how I would store my milk and where it would be sanitary enough for me to pump. I ended up buying a microwave to keep in my office so I could sterilize my parts. It was not like that the first time around.”

Now, as Caleb turns six-months, Rae doesn’t know what the future of her breastfeeding journey will hold, but she does know, she is going to allow herself to make whatever choice works best for her and Caleb.

“My goal was to breastfeed until at least six months and that is coming up,” says Rae. “At that point I’m going to reassess where I’m at and where he’s at. But breastfeeding the second time around has felt a lot less physically and emotionally demanding on my body. And the pandemic has pushed me to want to pump and breastfeed until Caleb is a year old.”