Meghan Koziel, mom and breast cancer survivor, bares all about feeding after a double mastectomy.

Meghan Koziel’s dream was to be a mother. But after being diagnosed with Stage II breast cancer at 26-year-old, Koziel didn’t know if that dream would ever come true. So, when she found out she was pregnant three years after undergoing 15 rounds of chemotherapy, 33 rounds of radiation, a double mastectomy and reconstructive surgery, it was nothing short of miraculous.

“The doctors didn’t think I could have a baby, so my daughter is definitely my little miracle baby,” says Meghan of her now 2-year-old, Kendra Jane, who is named after Koziel’s life saving oncologist. “When I found out I was pregnant, I started connecting with other breast cancer survivors who told me their hospitals pushed breastfeeding. I didn’t want to feel pushed, so I made a sign to hang over my hospital bed. I was a new mom and the last thing I wanted was to feel stressed about not having boobs.”

Meghan’s banner read, “No Breastfeeding Zone: Though breastfeeding is a very special task, please be aware before you ask. Our miracle baby will be formula fed, and it will not affect her future ahead. This mommy is a survivor.” It gained national attention after she posted a picture on social media. And while the sign worked in the hospital where she felt no pressure to breastfeed from medical professionals, society felt differently.

“I would get questions like, ‘I see you had a mastectomy, how are you going to breastfeed,’” recalls Koziel, 30. “I’m a breast cancer survivor and I literally don’t have nipples. So, unless people wanted my baby to suck on my scars, the answer was that I wasn’t going to breastfeed. I don’t want to call the people who asked me questions like dumb, but they were really dumb questions.”

Because Meghan was diagnosed with breast cancer at such a young age, she always knew breastfeeding wasn’t going to be an option for her. She stressed about how she was going to feed, until others put in their two cents.

“I was more worried about skin to skin because I have no feeling in that area,” Meghan explains. “I never thought how I was going to feed was a big deal until society had something to say about it. But I literally can’t breastfeed so to me that was minor compared to having a baby. I’m blessed to have babies and to be able to provide them with nutrition in an alternative way. If formulas were never created, I don’t know what I would do.”

Society couldn’t leave Meghan’s choices alone and went as far as to ask why she opted against milk banks.

“People on social media threw it in my face that I didn’t go to a local milk bank,” says Meghan. “But that milk isn’t tested. Kendra was my miracle baby and it felt irresponsible of me to give her random breast milk that wasn’t tested. Why would I put her at risk with unregulated breast milk when I could give her formula? It’s the same reason I didn’t get formula from Europe. It made me nervous to give her a product that wasn’t tested in the United States because I thought I could trust that more.”

Kendra is now a “perfect little string bean.” And Meghan, who is pregnant with her second miracle baby, plans to use formula again this time around.

“I wish society was more open to allowing moms to make choices that are right for them,” says Meghan, who is having another baby girl. “The world would be a much better place if society learned how to be nice. My birthing and feeding experiences with Kendra were great and I hope it’s the same with this new baby. My banner worked as a silent reminder as to why I wasn’t going to breastfeed, and you can bet I’ll be using it again.” 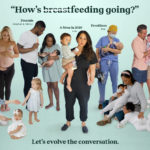 Don’t Assume Every Feeding Journey Should Look the Same 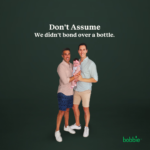 Don’t Assume We Still Can’t Bond Over a Bottle

Breastfed, Formula Fed or Milk Bank Fed? One Mom Experiences It All With Seven Kids (And Two Sets of Twins)

Not Breastfeeding in Brooklyn? Prepare to be Publicly Judged