When you have a new baby, whether it’s your first or fifth, you worry — you worry A LOT. Every parent worries; I’m a pediatrician and a mom, and I worry. This precious little being is mine, and my job is to keep her safe, healthy, and happy.

The first year of a baby’s life will take you on a rollercoaster of emotions like you’ve never been on before — the sleepless nights, the crying, constant feeding, changing diapers… but today I want to address the issue of Sudden Infant Death Syndrome and breastfeeding vs. formula feeding.

I am 100% partial about being impartial about the way you choose to feed your child. Your lactation practices should be totally up to you. I intended to exclusively breastfeed and ended up switching to 100% formula — doesn’t make me a bad parent, in fact, I did what was best for him (and me). But when you read articles titled “Does Formula Feeding Increase the Risk of SIDS?” or “The Risks of NOT Breastfeeding for Mothers and Infants,” it sends chills down my spine.

What in the world are you supposed to think as a parent if you cannot breastfeed? If you adopted your child? If you cannot breastfeed your child for medical reasons? If you CHOOSE to formula feed? Seriously, parents do NOT need one more thing to freak out about, to feel guilty about. There’s enough judgement surrounding formula and bottle feeding as it is, now you tell us we are endangering our babies’ lives? That they might DIE if they are formula fed?

I am here to say FEEL NO GUILT! Feel no shame! Read the data, understand it, and know there are MANY other ways to protect your child from SIDS and anything else that comes her way.

What is SIDS? What do we know about what causes SIDS?

Sudden Infant Death Syndrome (SIDS) is the sudden and unexplained death of a baby younger than one year of age. A diagnosis of SIDS if the baby’s death remains unexplained even after a death scene investigation, a review of clinical history, and an autopsy. But what causes SIDS? Currently, scientists believe there are several underlying causes likely to play the largest role in SIDS. This model is called the “triple risk model.”

The point of explaining this is to understand that SIDS is a mysterious, multifactorial process, and not one thing will cause it or prevent it, for that matter. We need to look at each baby, their risk of sudden infant death syndrome, and their environment. What role does breastfeeding vs. formula feeding play in this complicated syndrome?

What the Research Shows — and Doesn’t

I was a researcher for years before going into pediatrics, and I can tell you that despite its best intentions, research is FLAWED. In particular, research done regarding the issue of the protective effect of breastfeeding and SIDS, which is mostly done as a review of previous studies (meta-analysis) or as “case control” studies. Even the authors explain the problems with these methods- response rate is in most cases not ideal, data is collected retrospectively, producing what’s called “recall bias.”

How does breastfeeding protect a baby from SIDS? We don’t know the answer to this question, but there are some theories:

The bottom line is that no one really knows, and some researchers even go as far as saying that the results might be explained by issues associated with breastfeeding (for example, having your baby sleeping near you in the same room) rather than human milk or the act of and duration of breastfeeding itself.

I also found no studies evaluating the protective nature of babies who are exclusively fed expressed breastmilk in a bottle, so again, lots of confusion in the science and case-control studies. And while yes, I must agree with the finding that breastfed babies might experience a protective effect on SIDS, one cannot imply that formula feeding, in turn, has a causative effect on SIDS.

SO, what CAN you do to reduce your baby’s risk of SIDS?

Good news! There are LOTS of things we can do as parents to provide our babies with a safe sleep environment. In fact, the American Academy of Pediatrics (AAP) revised their safe sleep guidelines in 2016. There are many recommendations for a safe infant sleeping environment. Here are the highlights of what you need to know:

The AAP describes 19 recommendations to reduce the risk of SIDS and other sleep-related infant deaths. For a full list, see https://pediatrics.aappublications.org/content/138/5/e20162938

To me, it’s clear that understanding the science of SIDS is VERY unclear. As parents, we strive to provide a safe environment for our children, especially during these most vulnerable months. With that said, know that the issue of SIDS risk is multifactorial and no one single action can cause it or prevent it. Do your best to follow as many guidelines as you possibly can, but do NOT beat yourself up about your choice or circumstances surrounding how and what you feed your baby. Love, hold and care for your baby as only you can, and I wish you and your little one a safe and sound sleep.

Jacqueline Winkelmann, M.D. is supporting Bobbie as a medical expert. A board-certified pediatrician, Doctor Jacq has been in practice for 20 years in Southern California, where she has held many leadership positions, most recently as Hospital Chief-of-Staff and Member of the Board of Directors. Highly accomplished, she was selected as a Top Pediatrician by the International Association of Pediatricians: Leading Physicians of the World in 2018. A national and international speaker on Sports Nutrition, pediatric and adolescent health, Doctor Jacq is also a mom of two that supplemented and believes a pediatrician’s role is to support mothers during their most vulnerable time. 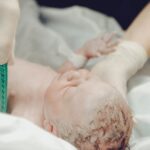 The Baby-Friendly Hospital Initiative: Where Are We 20 Years Later? 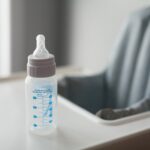 How Beneficial is a Formula Dispenser Like Baby Brezza?