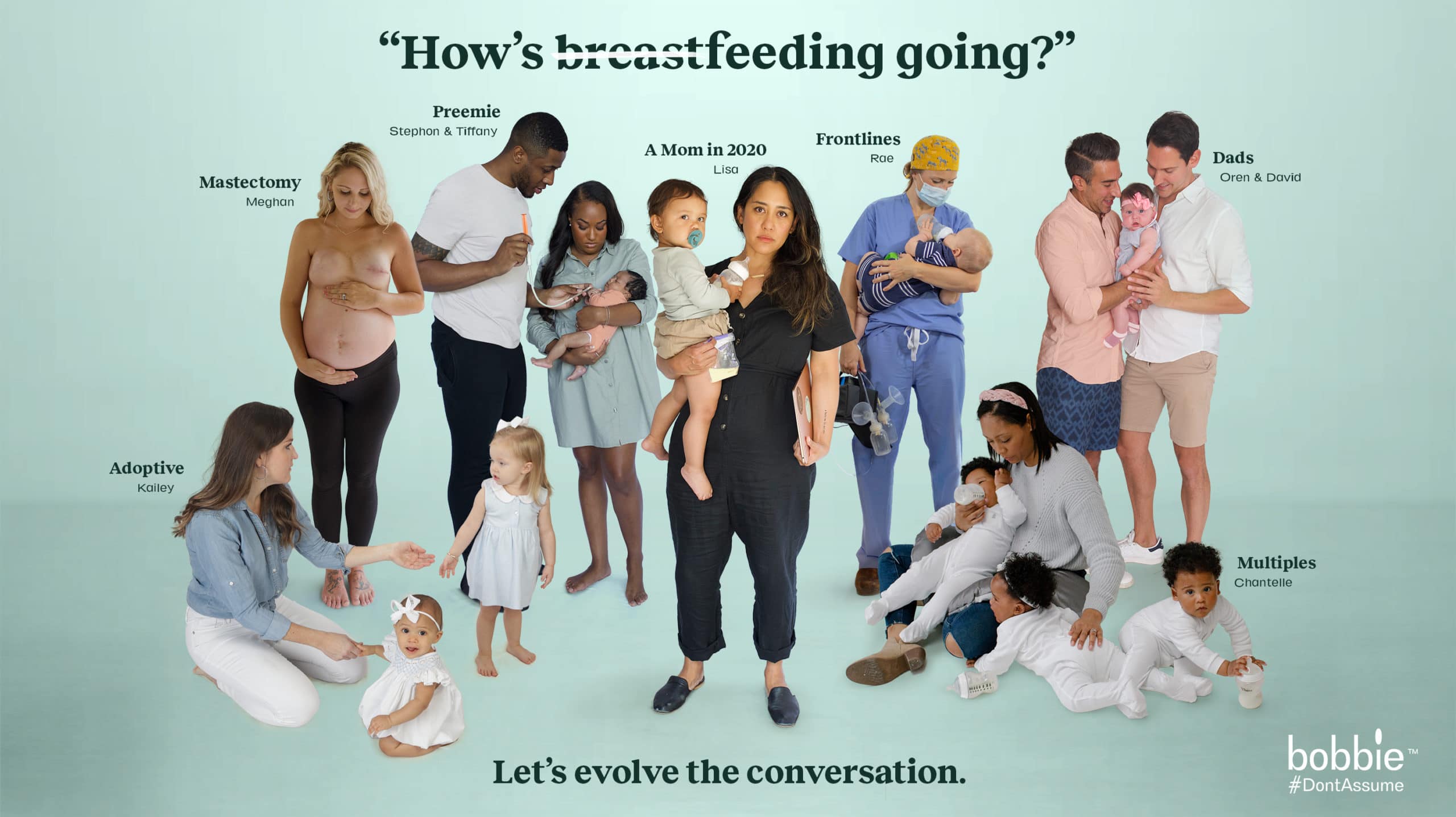 By Aliza Friedlander and Kim Chappell

How is breastfeeding going?

If you’re a mom with a new baby, it’s practically guaranteed that someone has asked you the simple and seemingly straightforward question, “how is breastfeeding going?”

Perhaps this question came from a doctor looking for a nutritional check-box, a mother-in-law looking for validation her grandbaby is being fed what she considers the ‘best’ way, or a friend looking to commiserate on the joys and hurdles of having a baby on your boob every three hours.

While well-intentioned, this question comes with pretty big assumptions that a mom, dad, or caregiver is able to, and dare we say wants to, breastfeed or provide breast milk to their babies. You see, ‘How is breastfeeding going?’’ can send a jolt of judgment down a new parent’s spine. Why assume? Maybe instead, we don’t assume!

It’s time to evolve the question about breastfeeding

As one of yet another parenting paradigm shifts in 2020, it’s time we start reframing that quintessential question. What if instead of asking about a specific way of feeding, we asked the all-inclusive question, ‘How is feeding going?’

Let’s evolve the guilt-ridden conversation and meet the reality of what modern parents are experiencing. It’s time.

More women are breadwinners, yet are struggling with their mental health and stress more than ever before.  Modern families include gay dads, surrogates, adoption, multiples, and preemies who don’t often have access to breastmilk. Let’s not forget the fact that women get limited paid leave yet are held to an almost impossible standard to exclusively breastfeed until their baby is six months old.

These combined factors lead to a staggering majority— 83% of US parents turn to infant formula in the first year of their baby’s life. And that’s ok.

Where is the national month for formula feeding parents, ‘the Silent Majority’?

August is National Breastfeeding Awareness Month. It’s a time when one single type of feeding is put on a pedestal. Meanwhile, the silent majority of parents will continue quietly shaking their bottles without the social media fanfare.

Where is the month for these parents who are still nourishing their babies the best way they can?

What about the parents pumping every ounce but also supplementing when they needed?

The parents who turn to formula on day one as a critical life-saving product?

The parents who don’t have nipples because they battled breast cancer before motherhood?

Or the ones forced to stop breastfeeding earlier than planned because they don’t have an accommodating job, partner, schedule, or support system? Perhaps their baby arrived on time, but their milk never did.

Parents, of all types, need less judgment and more resources. They need to be celebrated. They need more empathy, more support, and more shared experiences that normalize the fact that there is no one size fits all to feeding a baby.

It starts with sharing real feeding stories— our friends, readers and family shared some of their stories with us, for you:

Don’t assume I can breastfeed without nipples

Pregnant with her second daughter, Meghan Koziel didn’t know if motherhood would ever be in her future. Meghan is a breast cancer survivor and went through 15 rounds of chemotherapy, 33 rounds of radiation, a double mastectomy, and reconstructive surgery all before the age of 30.

“I would get questions like, ‘I see you had a mastectomy, how are you going to breastfeed. I’m a breast cancer survivor and I literally don’t have nipples. So, unless people wanted my baby to suck on my scars, the answer was that I wasn’t going to breastfeed. I don’t want to call the people who asked me that dumb, but they were really dumb questions. I never thought how I was going to feed was a big deal until society had something to say about it.” -Meghan

When their daughter Maya was born, David Rak and Oren Henry remember having to sign waivers in the hospital saying they allowed the use of formula. The couple’s surrogate shipped them breast milk for the first couple weeks, but then her supply dried up. David and Oren turned to formula, as recommended by their pediatrician, and never looked back.

“I love just holding the bottle and holding her close,” says David. “I love having her look up at me and catch my gaze. We will stare at each other while she’s drinking and every so often, I see a smile. It’s such a connective moment, like she is memorizing my face.”

Adds Oren: “It turns out dads can have that same chemical bond with their babies without carrying the child, without birthing the child and without breastfeeding the child. I totally feel it and I know David does, too. Plus, we have a wonderful, smiley talkative four-and-a-half month old who is changing and growing every single day in spite of the fact she only got limited breastmilk.”

Rae is in the minority. She’s one of the 25.6 percent of women in the US who did exclusively breastfeed up to the CDC’s recommended six-month mark. While she never struggled with the act of breastfeeding, sticking with pumping and offering her kids breastmilk while working three, 12-hour shifts a week, at a hospital in DC during a pandemic was a serious commitment.

“When I went back to work, I was pumping every three hours. I would leave in the morning and have to pump as soon as I got to my office. Pumping takes about 20 minutes and then I clean my pump parts and store my milk. It’s worth it to me, but if I had to work five days a week I don’t  know if I would continue. Luckily, I have a lovely team and if I need to pump one of my coworkers will usually scrub me out, I’ll run upstairs to my office to pump and then run back into surgery. But there are times when my coworkers aren’t available to help, in which case leaving isn’t an option and I’m stuck.”

Don’t assume I didn’t try to breastfeed with multiples

Breastfeeding one baby is hard. Breastfeeding three babies at one time is a task few of us can fathom. Chantelle Whittles’, the mother of triplets, wanted to try despite the struggles she had breastfeeding her older son. In the end, even though milk never came in with her triplets, she still has well fed babies.

“The triplets spent three weeks in the NICU so they could be monitored and during that time I only expressed enough milk for one baby to have one feeding per day,” says Chantelle. “Because I didn’t have enough for all three babies, our pediatrician recommended we use formula instead. I feel content knowing I gave breastfeeding my best shot.” – Chantelle

Before becoming a mom, Tiffany Allen and her husband Stephon had no idea there were multiple ways of feeding within one sitting. But after welcoming their daughter Arie-Marie at 33 weeks, they quickly found out that a baby could get both breast milk and formula simultaneously. Arie-Marie spent 10 days in the NICU learning how to feed on her own and now breastfeeds and bottle feeds.

“When they said I needed to give formula, I felt inadequate. Arie-Marie was breastfeeding well in the hospital so I wasn’t sure what was going on. The doctors told me that I needed to be able to see how much she was drinking at a time because she needed a certain amount of calories throughout the day. In the hospital they could weigh every ounce, but at home we couldn’t do that. All we could do was look at how much was in the bottle. Once they explained that to me I felt comfortable. And honestly, I think if I didn’t have formula it would have taken her a lot longer to gain weight. Being able to combine breastfeeding and formula feeding allows us to gauge how much she’s eating so she can grow.”

Kailey Dees became a mother in 24-hours. As a foster parent, Kailey received a call that there was a baby who needed a home. The next day the baby was in her custody. That was her first daughter, Emily “Emi” Eloise Dees,  born July 17, 2018. A few months later, Kailey learned Emi’s birth mother was pregnant again and Kailey’s second daughter, Ruthie Grace Dees was born September 11, 2019. While Kailey started out as a foster mom, she has since adopted both girls.

“At one point someone told me the formula I was giving Emi was the cheap kind. And after Ruthie was born, someone else voluntarily took it upon themselves to find me breast milk without ever having a conversation about that with me. I mean, is there really going to be a stigma around breastmilk or formula when it comes to a child that spent nine months in a womb that the mother nourished with meth and cocaine? You think after that formula isn’t going to be enough for my children to develop? And when you think about babies who have been adopted, are you immediately going to think less of them because they aren’t breastfed? It’s pretty obvious, if a child is adopted they probably aren’t going to be breastfed.”

Don’t assume you know my story

Lisa Yadao is a San Francisco mom who worked at a big tech company that provided every benefit a new or expectant mom could want- financial help with IVF, four months paid leave, private and equipped pumping rooms, even a $500 gift card for food delivery. But even with a supportive job, a supportive partner, and the steadfast determination to breastfeed, biology had a different plan.

“The reality of pumping at home and maintaining that against a feeding schedule was also something I didn’t quite grasp until I was in the thick of it. Despite all this, I forged ahead, still thinking it was the best and only option. It wasn’t until a few weeks at home, when I noticed my baby felt lighter, that I realized there was a very real problem irrespective of my own efforts. I raced my baby to the pediatrician’s office who confirmed she had been losing weight. My heart sank. I was failing as a mother to a baby I fought so hard to conceive. My baby wasn’t getting enough milk, and the “walk of shame” home involved a carton of formula from the grocery store to supplement my breast milk. At home, with a bottle of formula at her lips, my baby was the most serene and satiated she had ever looked, and I sat on the floor crying, defeated.” – Lisa

These parents above have started this conversation, we encourage you to share yours.

And before you ask a new parent how is breastfeeding going, remember to ask: How is feeding going?