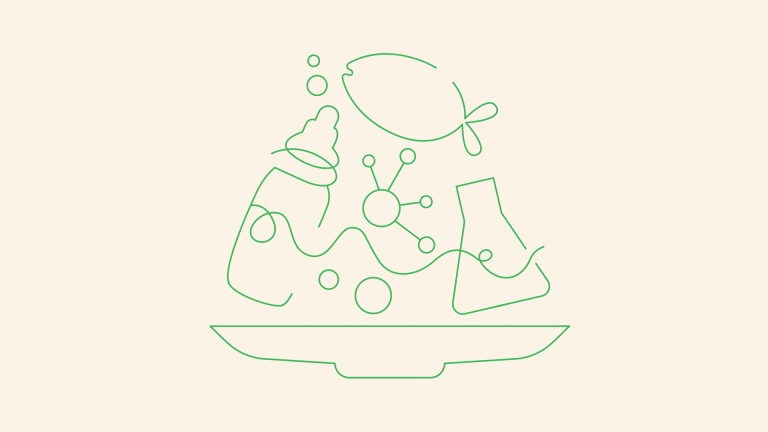 Welcome to our Expert Insight Ingredient Series! In this series of articles, we’ll be highlighting ingredients in infant formula that play key roles in early health and development. We’re kicking this off by exploring DHA. You can also check out our DHA Ingredient Guide for more details!

If you’re a parent, you’ve surely heard of DHA, which stands for docosahexaenoic acid. This omega-3 fatty acid gets a lot of attention when it comes to pregnancy, infants, and even early childhood. It’s an ingredient in some prenatal vitamins, is encouraged for breastfeeding moms, is in many infant formulas, and even shows up in milk and other beverages for toddlers and older children.

DHA – and other long-chain polyunsaturated fatty acids (LCPUFAs) like arachidonic acid (ARA) – have received well-deserved recognition in the world of nutrition for the role they play in early development,1 and in particular, for their role in brain and eye development. In this article of our ingredient series, let’s dig into the science behind DHA and find out why this omega-3 fatty acid is such a critical part of nutrition early in life.

What is DHA and why is it important for my baby?

DHA is an omega-3 fatty acid involved in several aspects of our physiology and metabolism. It is a key component of certain tissues and membranes in the body – which means adequate amounts of it can play a crucial role in development. Specifically, during infancy, DHA plays a central role in the development of the brain, eyes, and immune system.2

The brain accumulates large amounts of DHA before birth3 – primarily in the third trimester – as well as after birth. DHA uptake by the brain is highest during the first two years of life, a period of time when the brain is rapidly growing. In fact, the brain growth that occurs before your little one’s second birthday will be faster than any other time in their life! This early stage represents a critical window of time when optimal nutrition is so important for supporting development.4

DHA is also the predominant fatty acid in the retina of the eye. The retina5 is responsible for visual recognition by receiving and organizing visual information; it then sends signals from the eye to the brain, allowing us to see. In addition to supporting healthy development of the retina, DHA may also offer a protective role to this fundamental tissue in our eyes.

DHA and the immune system

There is some evidence that DHA and ARA might play a role in supporting the immune system, especially during early infancy when the immune system is rapidly developing.6 In fact, researchers found that infants fed a formula supplemented with DHA and ARA in the newborn period had markers of immune function7 that were similar to those of breastfed infants.

What are the health benefits of DHA?

DHA has been extensively researched over the last few decades, and in particular, to help scientists understand how this fatty acid impacts infant growth and development. The findings from preclinical and clinical trials on DHA – alongside another LCPUFA, ARA – led to the addition of DHA and ARA in infant formulas, a critical innovation in infant feeding. Some of the most important discoveries around why DHA is so important are highlighted here:

1- DHA and ARA supplementation in infants has been shown to positively impact cognitive development, even beyond the period when the formula was consumed. In one study, infants who received infant formula supplemented with DHA and ARA through four months of age were faster at processing information at six years of age compared to the group who didn’t receive DHA and ARA in infancy.8

2- Also suggesting that DHA and ARA impact brain development, in a study assessing mental adaptability and flexibility in three year olds, children who received the recommended dose of DHA and ARA supplementation had improved scores compared to those who received less than optimal doses.9

3- Clinical studies have demonstrated that DHA and ARA supplementation in infants improved visual acuity10 during the first year of life, compared to those who did not receive supplementation. Of note, the findings were based on a specific amount of DHA, 0.32% of total fat, an amount that reflects amounts of DHA found in breast milk. This illustrates that the amount of DHA in baby formula matters!

4- Long-term follow-up of infants who received supplemental DHA and ARA in infancy found that, at four years of age, their visual acuity was similar to what was observed in breastfed infants, which represents the gold standard in infant feeding.11

The benefits of DHA are seen beyond infancy – research has uncovered positive benefits of DHA and other omega-3 fatty acids in older children and adults as well. Heart health benefits have been observed when DHA is supplemented alongside another omega-3, eicosapentaenoic acid (EPA). DHA may also help reduce inflammation, support eye health in adults, and regulate behavior and attention in people with attention deficit hyperactivity disorder (ADHD).

ARA matters for infant development, too!

As nutrition research continues on LCPUFAs, scientists are learning that the presence of both DHA and ARA in infant formula are critical. In addition, the ratio of DHA:ARA also matters. Studies have found positive outcomes when ARA is at least at equal concentration to – and up to twice the amount of – DHA. Higher or lower ratios of ARA to DHA may not yield benefits. Experts agree on the importance of providing both DHA and ARA in infant formula.12

Recommended intakes of DHA in the US and Europe

There are definite differences between the US and Europe when it comes to recommended intakes of DHA in infancy, as well as the regulations around the addition of DHA to US infant formula.

*the US NIH recommends 0 to 12 month olds consume 500 mg per day of omega-3 fatty acids but does not provide guidance for DHA intake specifically.

Alpha-linoleic acid (ALA) is the “parent” fatty acid to DHA. Our bodies, through a series of complex steps, can convert ALA into DHA. However, in general, we don’t do this very efficiently. Further, some people – depending on genetics – have very low rates of converting ALA to DHA at all. For this reason, it’s important that DHA is consumed directly in the diet. Therefore, infants rely on breast milk or infant formula for their DHA.

Bobbie organic infant formula provides 20 mg of DHA per 100 kcal, meeting the EU mandate that infant formula contains 20-50 mg DHA per 100 kcal. While fish oil is commonly used as a source of DHA, the reality is that fish get their DHA by eating plants…so Bobbie uses a plant source directly – a single-cell algae called Schizochytrium which is high in DHA.

Bobbie infant formula also provides ARA, an important distinction since many of the health benefits of DHA have been observed in studies where ARA was also provided.
For an overview of the importance of DHA in early nutrition, check out the Bobbie DHA Ingredient Guide.  You can also read more about DHA in infant formula here. 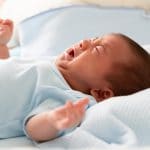 Oral thrush in babies— A Pediatrician talks symptoms, treatment and how it gets passed between mom and baby 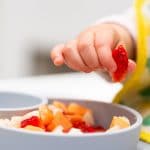 What is baby led weaning and when to start doing it?

Dr. Taylor Wallace explains the importance of iron and how you can boost intake with the 9 most iron rich foods.

What to Expect With Newborn Cluster Feeding

Cluster feeding can throw a wrench into your typical feeding plans, but don’t worry, it’s just a phase!

Why Can’t Babies Have Honey? What to Know About Infant Botulism

Dr Crosby explains why honey is straight-up dangerous for babies under 12 months of age.