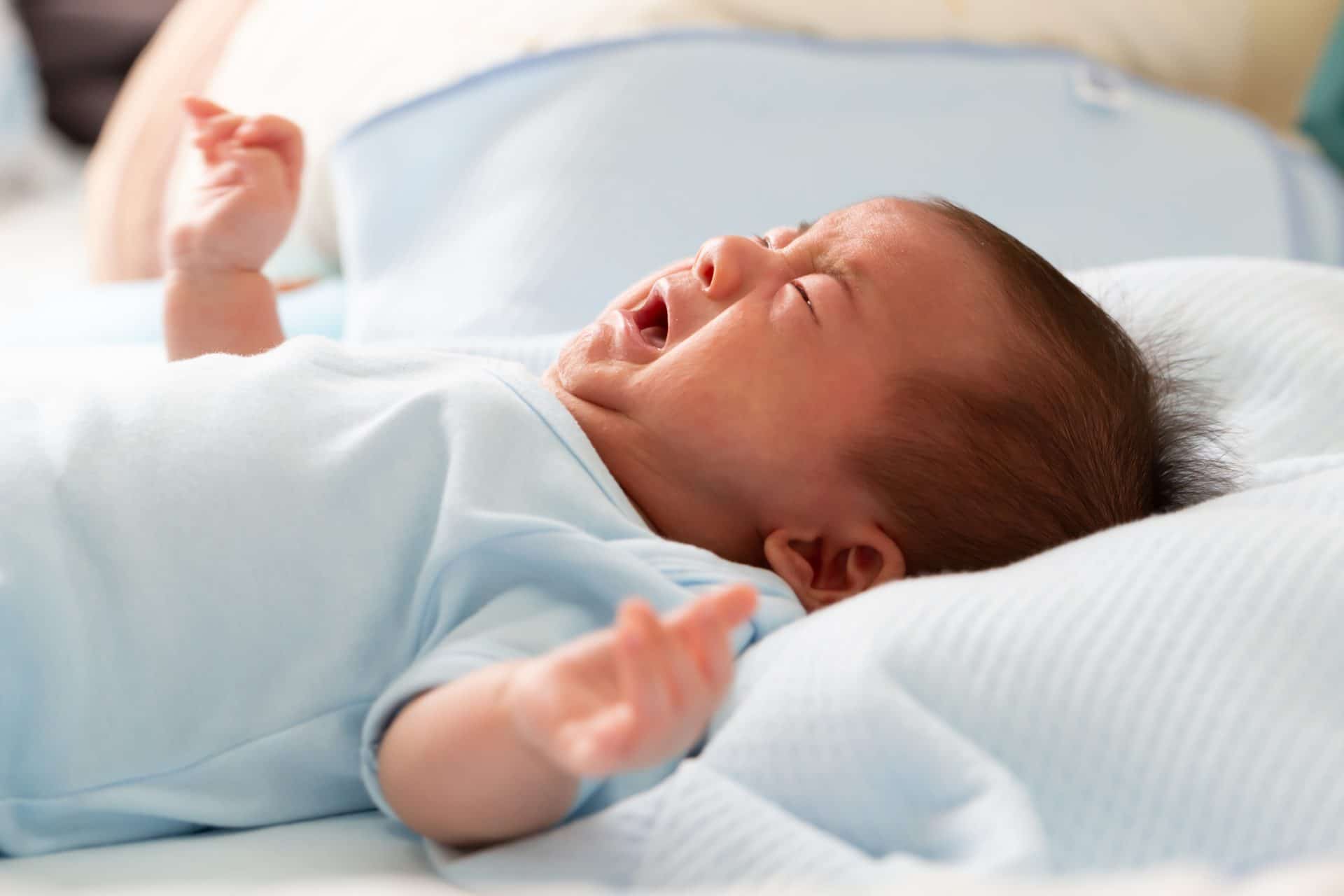 When my hungry newborn opened his mouth between sobs, I could see it. The tell-tale white patches on the inside of his cheeks had spread to his tongue. At least I knew what was happening because this second bout of oral thrush was worse than the last. Until then, I hadn’t even heard of oral thrush. What is oral thrush? What are the symptoms? Is oral thrush treatable?

A few weeks earlier, my little one had changed his feeding schedule. He was nursing in shorter bursts, and while he wasn’t losing weight, I felt like something was off. As a first-time mom, I wasn’t in the habit of trusting my parenting instincts, so I decided to wait a couple of days to assess. I thought maybe we were moving into a new “less is more” eating style. It was when my son became fussy and started turning away from opportunities to nurse that I got nervous and we went to see his pediatrician.

What do I do if my baby has oral thrush?

“Oral thrush,” my newborn’s doctor said while looking in his mouth. He showed me the small white places and explained this was a common yeast infection in infants. I felt an instant nervousness and asked if it was painful.

“It can be uncomfortable for some babies,” he started, “and then for others, they don’t even notice.” This was probably the reason my little one had been slow to eat and fussy when trying. So, to help heal his mouth, my doctor prescribed medication, and home we went. It didn’t take long for my son to enjoy his feeding sessions again, and after a week, I was thrilled to report to my husband that we’d moved out of our “thrush phase.” I hoped our next phase would be the “sleeping all night phase,” but two weeks later, I saw the white spots again. And about that same time, I kept feeling strange sharp, shooting pains in my breast. Seriously, what is oral thrush?

What is oral thrush in babies?

We asked Bobbie medical expert Dr. Régine Brioché, a private practice pediatrician for over 10 years, to give us insight into the mystery that is oral thrush. Dr. Brioché says, “Oral thrush is a fungal (yeast) infection caused by Candida albicans in the mouth and/or throat.” While Candida is a normal organism found in your mouth, oral thrush is more common in babies due to their reduced immunity. Thrush occurs in around 5% of newborns—and my newborn stepped into that group during his first month of life. Could I have noticed the signs of thrush earlier?

How do I know if my baby has oral thrush?

“The typical sign of thrush are white velvety sores (also described as a cottage cheese accumulation) on the tongue, gums, inside of cheeks and/or throat of an infected baby,” Dr. Brioché says. Thrush can also present as redness inside your baby’s mouth. While I was accustomed to checking to see if my newborn’s umbilical cord had fallen off and (possibly) obsessively looking for any signs of diaper rash, I didn’t make it a habit of peeking into his mouth. My first sign something was amiss was when he became unusually fussy while eating. Dr. Brioché explains that this infection can cause soreness in a baby’s mouth which can lead to difficulty eating.

How does a baby get oral thrush?

This is a fabulous question, and while yeast/fungus naturally lives in our mouths (and on our skin), there’s a combination of reasons thrush can appear. “A baby’s immature immune system, and inability to thoroughly cleanse the milk residue from their mouths, feeds the fungus allowing it to proliferate,” Dr. Brioché says. Mother of two, Kiersten Vorheis, experienced thrush with both of her newborns. During her oldest child’s very first doctor visit, Kiersten’s pediatrician noticed the thrush and pointed out the slight white tinge inside his lips. Kristen says her doctor recommended treatment and she was relieved to notice her little one never seemed too bothered or uncomfortable.

How can you get rid of oral thrush in babies?

If you suspect your baby has thrush, it’s key to know that treatment varies with age, the severity of infection, and your baby’s immune system. “For mild infections, treatment may be necessary and the thrush will go away on its own in one to two weeks,” Dr. Brioché says. You can help this process by keeping your infant’s mouth clean and by sterilizing your bottle nipples and your baby’s pacifier after each use.

Dr. Brioché suggests probiotics and some home remedies can be a benefit in healing your infant’s thrush. “Probiotics may be used to replace the fungus with ‘good’ bacteria,” Dr. Brioché begins, “and there are home remedies which may speed up recovery.” She shared an example of apple cider vinegar (which is known as an anti-fungal) diluted in water. The recipe for this is one teaspoon diluted in one ounce of water. Using a fresh cotton ball, you can use this mix to clean your baby’s mouth 3 to 4 times a day.

When should I take my baby to the doctor for oral thrush?

“It’s always a good idea to take your child to the pediatrician if you suspect that they have thrush and/or having difficulty eating,” Dr. Brioché explains. A doctor can evaluate the severity of the infection and recommend a treatment that might include prescribed anti-fungal medication. Dr. Brioché says in cases where your child’s tongue and mouth have visible white patches, or if your infant is having pain associated with eating, that’s when treating with a topical anti-fungal may be necessary. This medicine is usually applied 4 times a day by “painting” it on the inside of your baby’s mouth and tongue. Make sure to wash your hands before application. This treatment usually lasts 7 to14 days.

My doctor prescribed this line of medication for my son. His discomfort and the white patches in his mouth disappeared within the week. I was so happy we moved past that stressful stage. But what I assumed to be impossible became oh, so possible. My little guy caught thrush again. Through breastfeeding, I’d contracted thrush too—but didn’t know it. By the time I realized what had happened, I’d passed it back to my newborn.

Is thrush contagious for people breastfeeding?

The quick answer to this one is: Yup. “Thrush is contagious especially between infants and nursing parent—babies can pass oral thrush on through breastfeeding which can cause nipple thrush,” Dr. Brioché informs.

Kiersten was treated for thrush at the same time as her son. At the time of that first pediatrician visit, she said her nipples were sore, red, and cracked. “My OB/GYN prescribed an ointment for me to use and my thrush went away pretty quickly,” she says.

If you think you might be experiencing nipple thrush look for these symptoms:

A rash described as deep cracks and/or sores around the nipple or areola.

Burning, itching, or stinging that doesn’t go away when switching latching positions.

Is nipple thrush the same as mastitis and when should I see a doctor?

Nipple thrush symptoms can present similar to mastitis (an inflammation of breast tissue that can involve an infection) but these two ailments are super different. So, it’s a good idea to contact your doctor at the first sign of changes when it comes to your breasts or breastfeeding. “It’s important that if a baby is being suspected of having thrush, that both breastfeeding parent and child get treated or else the infection will continue to be passed back and forth,” says Dr. Brioché.

How can I cure thrush for both me and my baby?

After discovering the second round of thrush in my son’s mouth, I called our pediatrician. I also let him know about the sharp, shooting pain in my breast. He told me these were symptoms of thrush and to call my OB/GYN. So, we started the healing process…again, but this time I had some medication, too. I also took a break from breastfeeding and began exclusively pumping to stop the thrush from spreading again. It worked. We’d finally made it through this phase and I was so ready for a new one—thrush free.