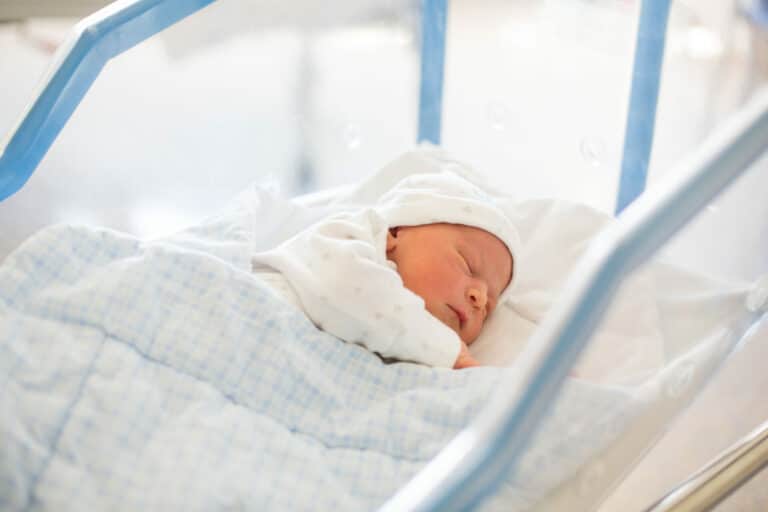 A 5-day old full-term infant male, exclusively breastfed, is admitted to the pediatric unit for dehydration, poor feeding and significant jaundice. He has lost 10% of his body weight since birth and is way too sleepy, even for a newborn. Baby does not wake up for feeds and is only nursing 5 minutes at a time. He is started on IV fluids and formula supplementation and placed under a bilirubin light. Blood is drawn every 6 hours to monitor his bilirubin level. He does well and is discharged home after 3 days.

Mom is left feeling guilty, ashamed and alone. She exclusively breastfed her newborn, as she was encouraged to do, despite the fact she noticed baby had lost quite a bit of weight, was super sleepy, not eating well, and her milk had not come in before they left the hospital after delivery.

This is a story I see at the hospital too frequently, and after 20 years of practice rounding on newborns and working in the pediatric unit, there has been a noticeable increase in readmissions to the hospital since our hospital received its “Baby-Friendly” certification. So, what has really happened with this well-intentioned initiative? Is the “Baby-Friendly Initiative” baby friendly at all? Let’s look at how it started, what it has accomplished and what the future holds.

The Baby-Friendly Hospital Initiative (BFHI) is turning 20 years old, with over 600 “certified” baby-friendly designated facilities accounting for over 1,000,000 births a year. The controversy surrounding the execution of its well-intentioned efforts as a global program has come under scrutiny even from those in the medical community.

After all, healthcare providers like us are on the frontlines, consoling guilt-ridden crying breastfeeding mothers who are made to feel like a failure, and admitting infants for dehydration and significant jaundice at much higher rates than in the past. So, what went wrong? Has it all been worth it?

A Road Paved with Good Intentions

As the world saw breastfeeding rates drop in the 1980s, a global effort launched in 1991 by the World Health Organization (WHO) and UNICEF was born (pun intended). The BFHI aimed to implement practices in order to “protect, promote and support breastfeeding.” The CDC and the United States Surgeon General became involved in 2011 with the assumption that increasing breastfeeding rates would lead to a decline in childhood obesity.

All sounds good so far, right? And yes, we know breastfeeding has benefits for babies and new mothers, and yes, we are aware of the nutritional superiority of breastmilk, with its mysterious ingredients that change every day, even throughout the day. Without a doubt, unparalleled. My problem as a pediatrician and as a mom with this well-intentioned initiative is perhaps more on the “implementation” side, because I must admit, it looks GREAT on paper.

The Ten Steps to Successful Breastfeeding

The framework that guides the BFHI is found in the Ten Steps to Successful Breastfeeding. According to Baby-Friendly USA, the accrediting body and national authority in all things “Baby-Friendly,” these “steps” have been shown to increase breastfeeding initiation and duration (we’ll look at this a little later…did this really happen?) Hospitals must follow all ten of these steps to maintain their “Baby-Friendly” designation.

Here are the ten steps, endorsed by several major professional organizations, including the American Academy of Pediatrics (AAP), American College of Obstetrics and Gynecology (ACOG), the US Surgeon General, and the Academy of Nutrition and Dietetics:

The Name Says It All

As a pediatrician and a mom, I get the well-intentioned effort, and the “Ten Steps” seem benign enough, but this really should have been called “Baby-Friendly and Mother UNfriendly Initiative.” These are some of the words I hear from moms regarding the BFHI: they feel EXHAUSTED, alone and judged.

Moms tell me if you want to breastfeed they’ll send in nurses and lactation consultants ready and willing to help and support, but the second you, as a mom, express an interest in feeding your baby formula, you are made to sign waivers and consent forms stating you have been advised of the “dangers” of giving your baby formula and are then left completely alone to figure out bottle feeding all on your own… seriously? Dangers of giving your baby infant formula? I have been guilty of smuggling pacifiers to the postpartum unit for some of my pediatrician friends after they delivered their babies at our hospital.

There are no nurseries to send your baby even for a couple of hours so a mom can physically recover from childbirth or surgery. What are we doing to these poor mothers? Who is this “friendly” for? It is a shame that the BFHI has to be all or none, because back in the day before BFHI, I had a conversation with moms who had declared on their forms they would exclusively formula feed, LISTENED to them without judgement, and discussed their reasons for their choice. They mostly felt relieved that someone gave them permission to use some formula and were very willing to try combination feeding (breastmilk + formula).

Things Have Been Taken a Little Too Far

The ten steps are one thing, but my biggest problem with this initiative is with the messaging, starting with the International Code of Marketing of Breast-Milk Substitutes which requires, among others, the following actions:

What in the world?! Artificial feeding? Hazards? It makes it sound like infant formula, the most regulated food item by the Food and Drug Administration (FDA), is close to poison and should be avoided al ALL costs!

Has It Even Worked?

Why is this so important? It’s important because what HAS been shown is that Baby-Friendly hospitals have a higher number of what we call “neonatal sentinel events,” serious injuries attributed to some of the BFHI practices. These include sudden unexpected postnatal collapse, newborn falls (due to exhausted moms), newborn dehydration and jaundice (increased in exclusively breastfed babies, and accounting for increase hospitalizations, especially in babies born early and those discharged from the hospital early).

Some Baby-Friendly policies have been shown to have limited to no benefit and have been documented to result in harm to infants, including skin-to-skin contact, rooming in 24 hours a day, no pacifiers or artificial nipples (which have been shown to reduce the incidence of SIDS), and “give infants no food or drink other than breastmilk, unless medically indicated.”

Exclusive breastfeeding is currently the leading risk factor for newborn readmissions, mostly due to dehydration, weight loss and significant jaundice requiring medical intervention.  The worst part is that since 2017, several studies have been published showing no impact of judicious early limited supplementation and sustained breastfeeding rates. So why not find a balance? Why not support mothers in their feeding journey, no matter what that is? IN the end, we know maternal well-being, especially mental health, plays a major role in a child’s future well-being. We NEED to do better!

What the Future Holds… One Can Wish!

Is there a “happy medium?” Can we come to an agreement that these extreme measures of the Baby-Friendly Initiative have not only failed to produce the desired outcomes, but have wreaked all kids of havoc in moms’ lives?

The light at the end of the tunnel is that we have had organizations agree that the BFHI was not only not producing the results it intended, but was causing actual harm- to babies, mothers and fathers, even to the staff. Rush University Medical Center in Chicago obtained its Baby-Friendly designation in 2017. After several serious adverse events, the BFHI was terminated.

In 2019, Rush because the flagship hospital for the “Family-Friendly Initiative” (it even sounds better, doesn’t it?) The initiative is described as a “new alternative to hospital newborn infant feeding support,” and it’s characterized as a respectful, judgement-free support (Hallelujah!) of exclusive breastfeeding, supplemented feeding and exclusive bottle-feeding before and after birth. It offers prenatal education and lactation support, rooming-in with nursery available on demand, support of safe skin-to-skin care, and complete patient education on ALL infant feeding choices and respect parents’ choices. Wow! Refreshing and supportive, gives me hope for the future! Let’s hope more hospitals turn to this truly Family-Friendly initiative.

As moms and dads, you worry about your baby, from the moment you see that little plus sign on the stick to well into adulthood. You desperately want to do what’s best, but the messaging, especially for moms, is SO confusing in this day and age: sit at home and tend to your baby, breastfeeding exclusively for 6 months, for an average of 30-35 hours/week, but ALSO be the breadwinner, start a company, climb the corporate ladder and play with the boys.

Completely unrealistic and does nothing but set us up to fail…as pediatricians, I firmly believe we must allow parents to have flexibility in their approach to feeding their child, support their individual journey, and respect their choices. As moms (and dads), give yourself a break! Acknowledge this is tough, find your tribe and know that your little one will love you for feeding and loving her. Hope we find a balance before another 20 years go by.

Even pediatricians supplement with baby formula for their own kids. If you’re wondering if formula makes kids less smart, the answer is NO!

Why Parents are Choosing Lactose Free and Reduced Lactose Formula

Researcher Dr. Bridget Young breaks down what you need to know about lactose in baby formula and discusses whether you should consider a lactose free formula.

Jacqueline Winkelmann, M.D. is supporting Bobbie as a medical expert. A board-certified pediatrician, Doctor Jacq has been in practice for 20 years in Southern California, where she has held many leadership positions, most recently as Hospital Chief-of-Staff and Member of the Board of Directors. Highly accomplished, she was selected as a Top Pediatrician by the International Association of Pediatricians: Leading Physicians of the World in 2018. A national and international speaker on Sports Nutrition, pediatric and adolescent health, Doctor Jacq is also a mom of two that supplemented and believes a pediatrician’s role is to support mothers during their most vulnerable time.

Even pediatricians supplement with baby formula for their own kids. If you’re wondering if formula makes kids less smart, the answer is NO!

Why Parents are Choosing Lactose Free and Reduced Lactose Formula

Researcher Dr. Bridget Young breaks down what you need to know about lactose in baby formula and discusses whether you should consider a lactose free formula.