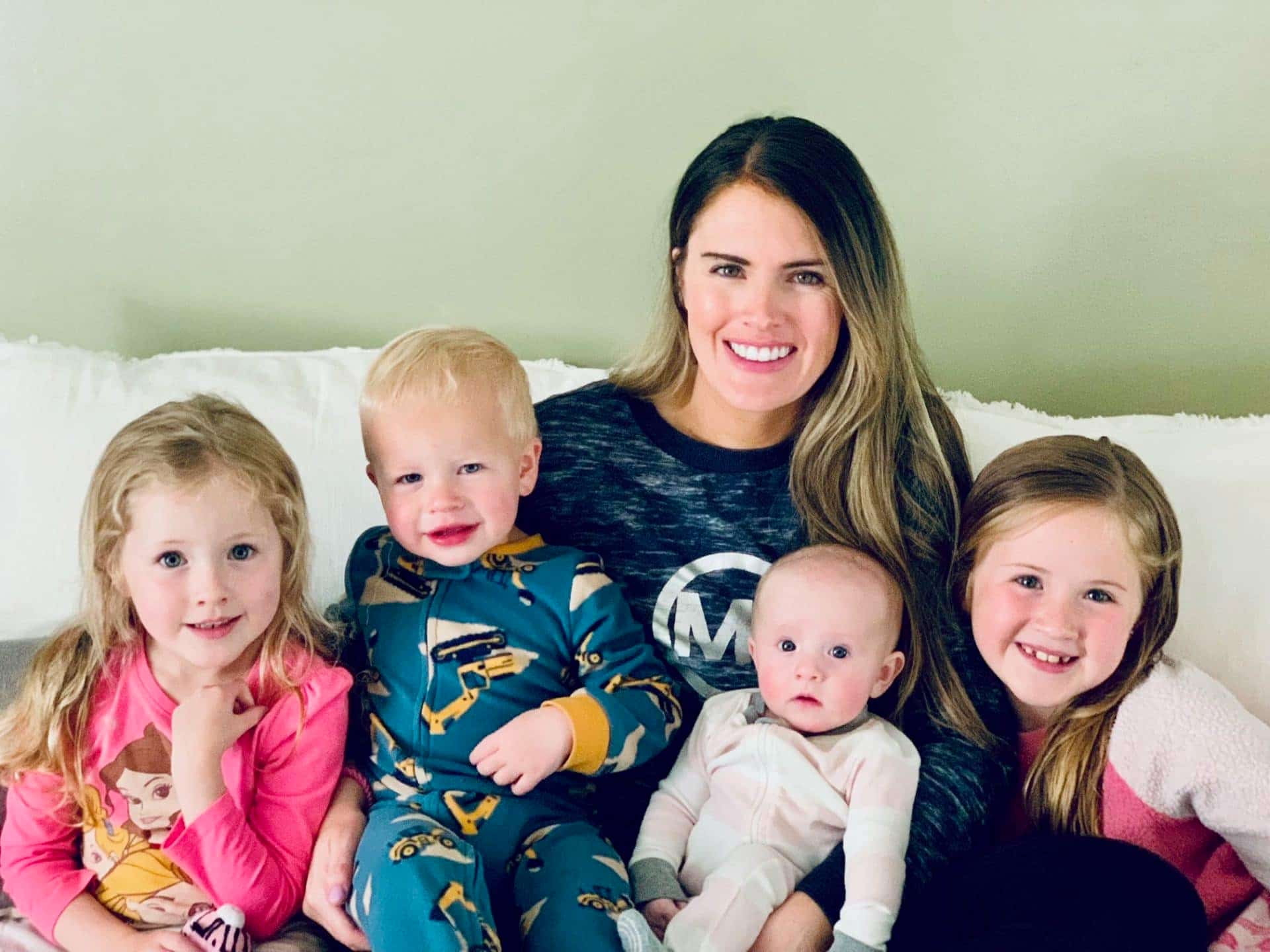 I get asked all the time at the grocery store how it is having two under two. “It’s crazy— and I have two more at school right now.”

Yes, it’s 2023 and I just had my fourth baby. A fuzzy little angel named Quinn (aka the fourth child) who came raging into the world recently and, well, sometimes I question my own sanity. Every day, actually, at least once. I mean it’s just 4 kids, right?

It’s not groundbreaking to hear that a lot of my fellow millennial moms are choosing not to have kids at all. In fact, a CDC report shows that the birthrate has declined 4% from 2019 to 2020 – the sharpest single-year decline in almost 50 years. But what people aren’t talking about is that others are having more kids— or at least think more is ideal. For years, two kids were deemed the perfect amount. But a recent study found that 41% of American families think three or more children is the ideal amount.

Everything is a season, and knowing that this is mine with my kids at home, makes the hard days a little easier.

So let’s delve into the most FAQ’s I get about having four kids in the Year of Our Lord 2023, because obviously I don’t need them all to help me run the farm.

(I also want to add a disclaimer that this is what works for me and my family, and in no way do I represent all women who choose to have a bigger family.)

Did I always want to have four kids?

Well, yes and no. I come from a family of six siblings— the third of five girls, smack dab in the middle. (Yes, I have been to years of therapy.) I wanted a big family someday, but not, like, six big. It was hard being one of six. I often felt like my parents, who relentlessly tried, didn’t have time for me, there was never enough money to go around even though we were upper middle-class, and I felt a lack of identity being “one of the Madson girls.” But I loved having a lot of siblings— still do. In fact, my relationship with my siblings as an adult was one of the main drivers for me to have more children. I talk to my sisters daily, I hang out with my brother at least twice a week, and I actually consider them to be my very best friends, something my mom told me would happen my entire childhood.

After one kid, it’s just logistics, a bigger car, and maybe a Lexapro prescription.

Is being in a big family hard?

Yes. But I always had someone to play with, I learned more independence since my parents couldn’t do everything for me all the time, and family reunions now are a blast.

I think about that Highwomen song a lot when things get out of control at home.

“Yeah I want a house with a crowded table

And a place by the fire for everyone

And bring us back together when the day is done

The door is always open

Your picture’s on my wall

Were all of my pregnancies planned?

Pretty personal of you to ask, but yes, actually, they were. I had my first at 25, but every pregnancy has gotten progressively worse as I age, so I had the last two close to get it over with. There were two miscarriages in there as well, and almost a year of infertility. I feel relieved that the gang’s all here now, because taking care of three children while pregnant with a fourth was an experience I would 10/10 not recommend.

What does your husband think about having 4 kids?

Kevin is akin to Michael Scott as a “little kid lover” and would probably have eight kids if I’d be down with it, but lest you be fooled by his sainthood, he is an anesthesiologist who works 65+ hours a week so he does not get to have an opinion. Truth be told, if I had a partner who was around to help a little more, I might be able to handle five. (!)  But his job is also what allows me to be an 80% stay-at-home mom, 20% work-from-home mom so I can’t complain. Having more children really does affect you financially, not because each child is so much more expensive— because honestly, our food/housing/clothing budget is not much tighter with four than two (although I know that will change as they get older), but because childcare for four is much more expensive. Which leads me to my next question.

I was the kind of person who believed I’d work through it all. I did, up until my third was born, right in March of 2020 when the pandemic shut the world— and my career (brand marketing for a travel company)— down. And honestly, it’s a bit of a relief that it did, because I felt capable of managing a career and two kids. But three really tipped the scale for me. For some women it happens with one or two, but I’ve seen women gracefully handle high-power careers and 4+ children.

I think being a working mom depends on a few factors:

1. What is your career? Is there any flexibility? Because someone is always getting sick, there are school programs to attend, and mom needs to sleep at some point. If you have a job that expects you to work as though you don’t have children, I wouldn’t recommend four because odds are, at least once a week you’ll be needed at home. Maybe more during cold and flu season.

2. What kind of support do you have? My husband’s career is not flexible at all. At a time when others were moving to remote work, expanding their family’s options and caregiving roles, my husband began working more, with overwhelmed ICU’s, and was always in-person at the hospital. Help from a spouse or friends or grandparents, though, could change that dynamic for some women, and I have several friends who share work and childcare 50/50 with their spouse, both of them working part-time.

3. What’s your time frame? One reason I wanted to have my kids close together is so I could be back in the workplace faster. Since I’m already home and a slave to nap schedules, carpools and diapers, I figured I might as well just wrap it up. Once my kids are all school-age I plan to return part or even full-time.

Do others judge you for having a large family?

When I was breastfeeding my first, I kept waiting for some stranger in public to complain to me so I could freak out at them for being offended by me feeding my baby. But it never happened. Kind of a bummer, TBH I had a great speech planned. The same has been (mostly) true of having more children. Some people say, “Wow! Four! You must be busy!” Others give me sideways glances. Occasionally an older woman will tell me how blessed I am and how she wishes her own daughter would have kids.

I do have one friend who thinks I’m doing a terrible disservice to the planet because of the carbon-footprint of four children, which I acknowledge. But for the most part I think it’s like the Polish expression, “Not my circus, not my monkeys.” As long as I don’t ask them for money or help, they don’t really care.

Does being a mom get easier as you have more kids?

This is a topic my mom friends love to discuss. Which baby tips the scale? For some, 2-3 was it. For others, 1-2. My answer to this, henceforth and forever as a self-proclaimed expert on the topic, is that 0-1 is by far the hardest and the most life-changing adjustment. Three was too much for my career (see above) and four has made me just a little more neurotic than before, but learning to become a parent for the first time is much harder than any subsequent child.

Does having more kids actually make you happier??

Man, I don’t know. I am a frazzled lady. I want to have it all, but it’s hard to do that when you have to spend 10 minutes of your morning chipping away at cereal hardened onto a bowl from being left out at night. I want a cool career with travel and promotions and late nights, and I want to be the one to tuck my kids in, and be the room mom and catch their vomit with my hands on the way to the bathroom because they can’t make it. If anyone has to do that – I want it to be me.

If it’s not possible to have it all, then I choose them. I don’t know if I’m happier on paper than I was eight years ago, before I became a mom. Truth be told, the quality of my life has taken a bit of a downturn. But there’s more joy in my day than there was before. I laugh more. I make up more dumb songs and play pretend and love my parents more than I did before I had kids. I think I’m a better human overall.

I wonder sometimes at the concept of having children. What is their purpose? We don’t need them to carry on a name or a business. (At least not us!). We don’t need an heir. They are not necessary, I am realizing. But I wanted big family vacations and traditions. I wanted summer reunions and a full house. I wanted them to have each other, most of all, perhaps because a meteor could end us all and wouldn’t you like to be near your sister when it does?

Whether you have one or four, or eight – I think that’s up to you and what you can handle. And the hard thing is, sometimes you don’t know what you can handle until it’s too late. But when I think about the future I want for myself – it’s a big, crowded table. (That I don’t have to clean, because dammit I made dinner and someone else should sweep the floor.)

Mandy Voisin is an author, reader, writer, and altogether indoorsy. She’s raising her four children in the mountains with her husband Kevin.