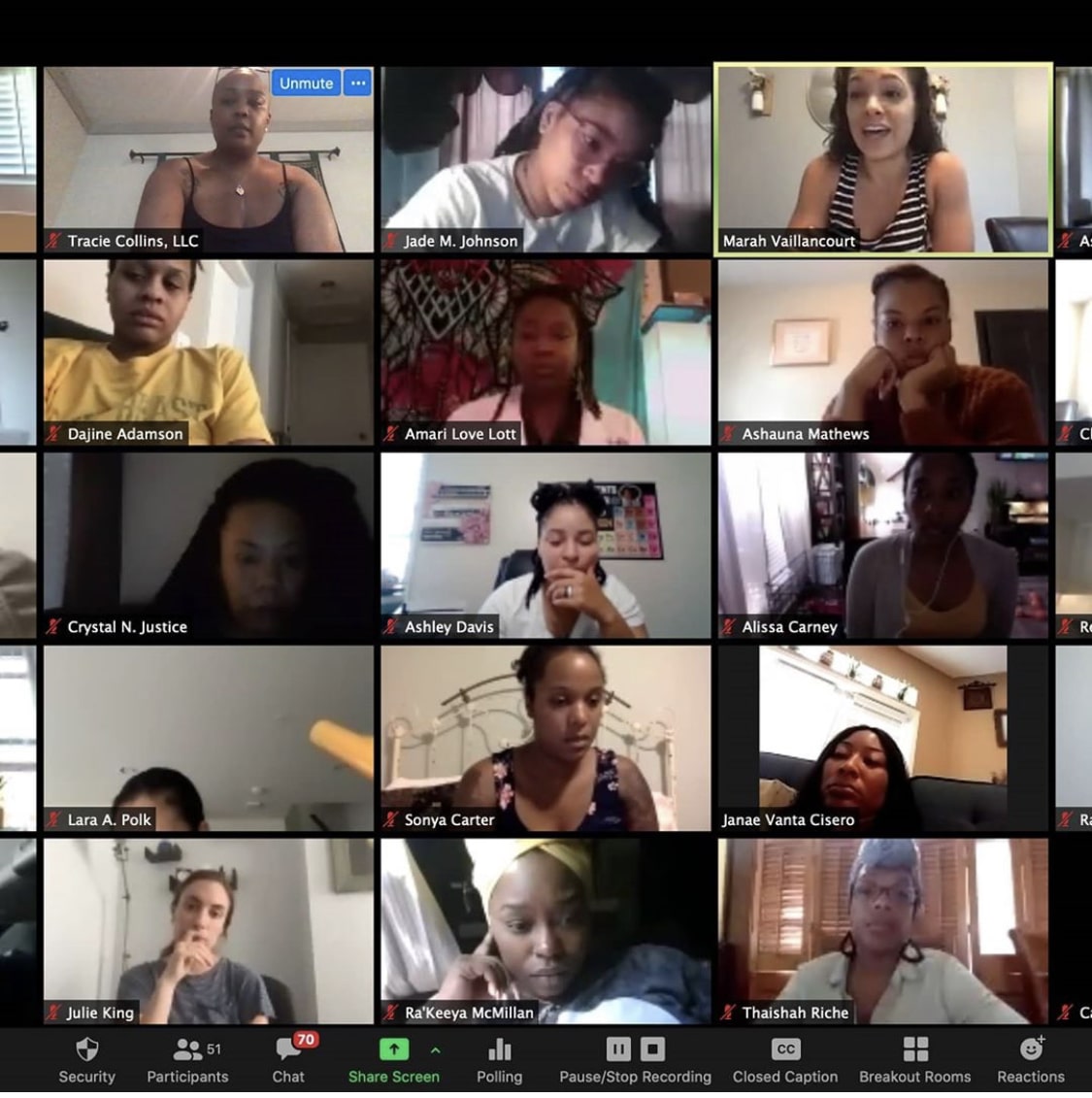 Tracie Collins’ purpose and life’s work is rooted in the gift of life. In two decades as a doula and mid-wife, she’s the first to tell you’re called to the work. It chooses you. You don’t choose it.

With more than 1500 births under her belt, Collins has never lost a baby. Her current mission is make sure we stop losing so many black mothers.

“I understand that you’re (the birthing mother) at a portal,” Collins said, describing the labor process. “You can stay here on this side, or you can choose to leave.”

In 2017, new and devastating  black maternal mortality rate figures drove the mother of two from the birthing space to a new business plan. Collins, a California native, is now an Atlanta-based doula birth expert. She’s developed the National Black Doulas Association, an online network of over 200 doulas and doulas in training. Collins heads the latter with in-person training that’s shifted online during the pandemic. The training is centered around her expertise in the mother’s body, proper prenatal nutrition and every aspect leading to efficient, and safe labor. It all comes from the foundation of midwifery.

“Number one, we were dying,” Collins said on the NBDA development. “It was real common sense, Are you going to be a part of the solution? And also, again-where are all the black doulas?”

The online directory serves as a base for field training, and most importantly, a resource for black families looking for certified birthing experts to guide them through what can very well be described as a health epidemic facing black mothers.

This year, researchers with the National Center for Health Statistics found that of the 658 women who died of maternal causes in 2018, black women were the face of most deaths. Black mothers died  2½ times more often than white women. According to the CDC, that’s 37.1 black mothers dying to 14.7 white mothers per 100,000 live births.

Further research from the CDC takes a look at nearly a decade’s worth of maternal mortality rates—from 2007 to 2016- showing black mothers died at a rate of 3.2 times that of white mothers.

Becoming a black doula and mid-wife

When Collins began her career in 2000, she said she was just one of two black doulas in the Bay area. The same held true when she began in the mid-wife space circa 2003. Over the span of her career, she’s realized the racial disparity in birthing spaces can tie right back to the level of communication regarding pain.

“You can tell me something, or you can make a facial expression (during birth), and I’ll know exactly what you’re saying without you uttering a word versus the counterparts saying ‘Well, what does that mean?”

“We can’t have that when our life is on the line. That’s why representation matters so much.”

Collins is now serving on Bobbie Baby’s Mother Board. Co-founder and COO Sarah Hardy was one of Collins’ previous clients. Collins coached Hardy through the births of both her children in 2014 and 2016.

Hardy approached Collins last year about joining the board, describing Bobbie’s mission to provide formula with rich, wholesome ingredients. Collins said she was eager to join her friend and client on another part of the mission-diverse outreach to new mothers who may be struggling against the stigma attached to formula-feeding.

Collins said her board role is also about helping to offer better solutions and information to mothers for their feeding journeys.

“I also believe there’s no room for judgement in this field. Breastfeeding, the journey in that, also leads to some sort of postpartum blues and or depression because of the feeling of inadequacy around not being able to feed your baby. There’s no judgement in that.”

“What needs to happen is we need to make sure mom and birthing person feels extremely calm and comfortable  that they’re giving their babies something good, that’s the best they can give them outside of their milk themselves.”

This is a woman-led mission so their approach is going to be different, and we need to get white men out of our vaginas and uteruses. Politics has no place in pussy. It doesn’t. So how we can reclaim that is really important.

Nicole Carr is a mother of three and Emmy-Award winning journalist living in Atlanta, Georgia. She has more than a decade of storytelling under her belt and just gave birth to her third baby in the height of her career. She also enjoys a good half marathon, books, travel, work as an adjunct professor, and volunteering to support military families.