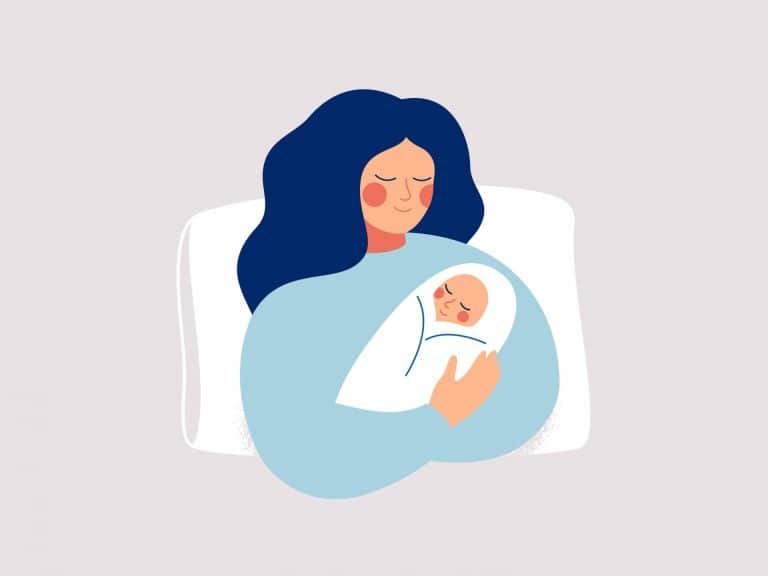 New mom Lindsay is sharing what life is like with a newborn. Don’t miss Week 1- Birthing & Breastfeeding.

Our lactation consultant arrived on a Tuesday morning. I remember being anxious about a stranger coming into our home — not only because of the consistent threat of COVID-19 but because of the mess.

Josefine hadn’t slept much the night before, and my husband and I were zombies living in an unkempt house. Mugs with long-forgotten cold coffee scattered across every surface, pacifiers and receiving blankets stuck in our couch. We piled clean laundry on our dining room table, slowly making our way through folding it. I briefly considered tidying up but then I reminded myself, hey, I had a baby a week ago — I don’t need to apologize.

When I heard her car pull into our driveway, I put on my favorite nursing bra (A.K.A., the only one that fit my ginormous breasts.), a spit-up free t-shirt and headed downstairs to greet her. She was a kind mom of two who was soft-spoken and patient. I felt instantly at ease with her. We made small talk about our family and becoming parents, and we cooed over Jo, all seemingly in an effort to buy time.

The point of her visit, of course, was for her to watch me breastfeed, which meant bringing out my boobs within ten minutes of meeting this new person. So much of pregnancy and postpartum is about being halfway or fully naked in front of people you don’t know very well. While I wouldn’t consider myself modest per se, I wasn’t exactly comfortable when I was still figuring out my post-birth body.

She helped me build a pillow fort with our throw pillows so I would feel supported. Since she asked for Jo to be hungry when she arrived, I tried my best to tune out my daughter’s cries while she explained proper feeding positioning. My husband, unable to do much for me, rocked and swayed our daughter, attempting to keep her calm. The lactation consultant took her at the last minute to weigh her on the baby scale, so we could then weigh her again after she fed. This would let us know how well she was eating.

To begin, we tried the cradle hold with my Boppy nursing pillow in position. This is just what it sounds like, holding a baby against your chest. She showed me a handful of tricks and tips to correct the latch, and continuously asked me if it hurt. She explained it probably would be a little painful since my nipples were already scabbed, inflamed and red, but it should feel more like a tug versus a sting. She watched as Jo enjoyed her fourth meal of the day, keeping a close watch on her mouth and my boob.

She offered me water and rubbed my back, and my husband took notes. When it was time to switch to the other breast, we tried the football hold. Again, this is just like it sounds, holding your babe on the right or left side of your body. I found this more accessible, and I could almost do it independently without an assist. It wasn’t — ahem — a touchdown, though. It still didn’t feel great, no matter how many times we latched her on and off.

Once Josefine kicked her head back to let us know she was done, the lactation consultant weighed her. She gave me a hopeful grin as she broke the news I already knew..

Josefine wasn’t effectively drinking the ounces she needed to thrive.

In other words, she wasn’t emptying out my breasts. This meant not only was she not receiving the breastmilk she needed, but I was also at risk of developing painful breastfeeding complications, like clogged ducts or mastitis.

I’ll never forget her looking at me and saying, “You fed her with a syringe to make sure she ate, didn’t you?” I nodded, explaining I was anxious about nipple confusion. “That was your mom instinct — the only reason she’s been gaining weight is because you did that. Good job, mama.”

It brought tears to my eyes. Up until this point, I felt as if I was failing as a mommy —  a role I had dreamt about over since I was little myself. And now here I was, doing all that I could for my girl. My gut was figuring out parenthood, after all.

The lactation consultant looked in Jo’s mouth and told us not only did she have a tongue tip but a lip tie, too. She could tell where the pediatrician had snipped her tongue tie, but it wasn’t fully released. The only way to truly remedy the issue is via a Frenotomy at a dentist’s office. This is a procedure where a dentist uses a laser to release the frenum — fibrous tissue under the tongue and upper lip — to provide an improved range of motion. This allows many babies to latch properly and, thus, feed.

She recommended a local office known for its track record, and suggested I pump in the interim. She helped me put together my pump, showed me how to use it, and then suggested a follow-up appointment after the procedure.

After she left, we went into our typical type-A planning mode. My husband sterilized the breast pump parts and bottles while I got JoJo down for a nap. We were both feeling positive — we finally had a plan! A solution! — and then it all came crashing down.

The dentist informed us there was a — wait for it — six-week waiting list. They asked if we wanted to be put on a cancellation list, and we agreed. We texted the lactation consultant, and her suggestion was to pump every two to three hours to maintain and grow my supply.

Considering it was all I could do for my daughter to grow, I got right to it. My first pump yielded about an ounce. A few hours later, it didn’t improve. By the next day, I was producing about the same. Again, I texted the lactation consultant, and she said I would need to increase my milk supply and gave me a list of options to try.

These included supplements, certain foods (like oats), and one power pumping session each morning. This meant pumping ten minutes on, then ten minutes off, on repeat, for an hour. I did it all: I ordered the Liquid Gold supplements, switched up my diet, downed coconut water and blue Gatorade — you name it. Because JoJo wasn’t fully eating for the last 1.5 weeks, my body was playing catch-up. To stay preoccupied while I power pumped in the wee hours of the morning, I watched ‘Gilmore Girls’ and fantasized about the mother-daughter relationship I’d one day have with Josefine.

At first, it felt like a routine: we got up every 2-3 hours as a family. I pumped, my husband gave her a bottle, our dog begrudgingly followed us, and we went back to bed or to our life. I ordered hands-free pumping bras from Amazon so I could drink coffee or eat lunch. There was still nipple pain, but not as intense as with breastfeeding, and it felt better-ish within two days.

Emotionally, the control and the reassurance was such a relief. I didn’t have to worry if she was getting enough since I knew exactly how many ounces she drank. I was sleep-deprived but I also had a mission: pump, pump, pump so she could get back up to her birth weight. (And then we could stop setting the alarm every three hours.)

A few days after this pump-bottle-burp-change-nap ritual, we were preparing to go for our first family walk when I received a surprise phone call from the dentist: “We have a cancellation opening on Tuesday. Can you come in?”

And just like that, we made an appointment on JoJo’s two-week birthday.

As is typical of parenting, it didn’t go quite as expected. Weeks three (and four) would prove to be some of the hardest of them all.